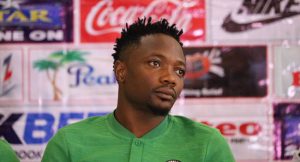 The Kano State Police Command has confirmed the arrest of a 30-year-old man on charges for impersonating Super Eagles Captain Ahmad Musa.

The man, identified as Gambo Yakubu, was arrested after defrauding people of more than N700,000 under the guise of Nigeria Super Eagles captain Ahmad Musa.

The man hiding under the name claimed that he could help people to get access to contracts with football clubs in Europe, where he is looking to bring in money to get that opportunity.

Following his arrest, he was found with documents bearing the name of the famous footballer Ahmad Musa, with which he defrauded innocent members of the public

The Premium Times reported, that he defrauded more than 15 persons of N700,000 and spent the money on his girlfriends at hotels in Sabon Gari area of Kano.

According to the suspect, Yakubu said, “He is selling a form for N5000 to young people who desperately need to play football abroad.”