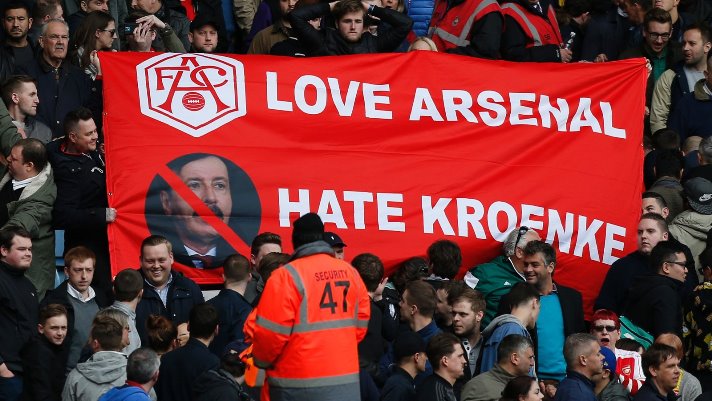 Arsenal director Josh Kroenke has refused to consider selling the club during a stormy meeting with a fans’ forum.

And he admitted that the club had “shredded the trust” of supporters by signing up for the aborted European Super League.

But shaken Kroenke made it clear that the family had no intention of selling up as he repeatedly apologised for this week’s events.

When one angry caller told him he was ashamed to be part of Arsenal, Kroenke replied: “I understand that statement.

“That was a very tough one for us to weigh. We decided a Super League without Arsenal was the worst of both those answers.

“Then we asked what the fans want because I think the global fan wants to see Arsenal versus Barcelona as much as possible.

“I think the European fan wants to see more big matches between top clubs, to be quite frank because their domestic league is so predictable.

“But as one Chelsea supporter wrote on a sign that I saw online the other day, English fans still want your cold nights in Stoke.

“We were put in a very difficult position by forces outside of the club and we got it wrong.

“All of our trust was shredded this week, I understand that, but I still believe that we are fit to carry on in our positions as custodians of Arsenal.

“I might be met with scepticism but over time I hope to establish some sort of relationship with our supporter groups and show them that we are capable of taking the club forward.

“When are we going to sell? I am not willing to answer that question because we have no intention of selling.”

Venkatesham was equally contrite, insisting: “Arsenal were categorically not the authors or drivers of this Super League proposal but that does not excuse what happened.

“What was clear to us what the train was leaving the station. The project was about to be launched with some of the biggest clubs in Europe.

“Due to concerns about us being left behind, we made the decision to join.

“But it became immediately apparent that we made not only a bad decision but a terrible one.

“We immediately got out as quickly as we possibly could and now we need to say sorry to lots of people.”