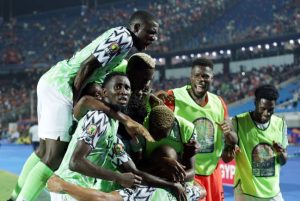 The Super Eagles of Nigeria are now the third-best team in Africa and also placed 32nd according to the latest global ranking released by world football governing body, FIFA.

The latest FIFA ranking list which was released on Wednesday, saw the Super Eagles of Nigeria move from 4th to 3rd position in Africa and from 36th to 32nd in the world.

It will be recalled that Nigeria recorded back-to-back wins in March against Benin Republic and Lesotho in the final rounds of the 2021 Africa Cup of Nations (AFCON) qualifiers.

The Eagles defeated Benin Republic 1-0 in Porto-Novo and then trashed Lesotho 3-0 in Lagos to bok finish their AFCON qualifying games in style.

Meanwhile, the top two positions in Africa are occupied by Senegal and Tunisia respectively.

The next FIFA/Coca-Cola World Ranking is expected to be released on May 27, 2021.

Meanwhile, Manchester City midfielder Kevin De Bruyne has signed a two-year contract extension that will keep him at the club until 2025.

The Belgium international, whose existing deal was due to expire in 2023, is 30 in June and now looks set to see out most of the remainder of his career at the Etihad Stadium.

De Bruyne has had a glittering spell since joining the club from Wolfsburg in 2015, winning seven major trophies, which could become 11 by the end of the season if City are successful in their hunt for a quadruple.

However, ominously for the rest of Europe, he reckons the best is yet to come for himself and Pep Guardiola’s team.

De Bruyne, who was named as the Professional Footballers’ Association’s player of the year in 2020, is having another impressive campaign, with seven goals and 16 assists so far.