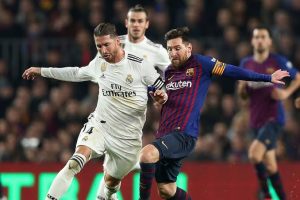 Zinedine Zidane men on Saturday defeated Barcelona 2-1 to move to the top of the La Liga league table.

The La Liga champions ended Barcelona 19 match unbeaten league run with a goal from Karim Benzema and Toni Kroos in the first half.

Real Madrid on Saturday employed the same tactics used against Liverpool in the UEFA Champions League and scored in 14 minutes when Benzema flicked in Lucas Vazquez’s cutback for his 19th goal of the season.

The Merengues doubled their lead against the run of play in the 28th minute when Kroos’ free-kick deflected into the net, his first free-kick goal in el Clasico.

Barcelona which got back into the game later on got a breakthrough in the 60th minute as Oscar Mingueza dispatched Jordi Alba’s low cross to raise the visitor’s hopes.

Real Madrid had several opportunities to extend their lead but could not and had Casemiro sent off in the 90th minute.

Barcelona had an opportunity to equalize in the last minute as substitute Ilaiz Moriba’s shot cannoned off the bar in the last minute of added time and Real escaped with a precious win that extended their unbeaten run to ten matches.