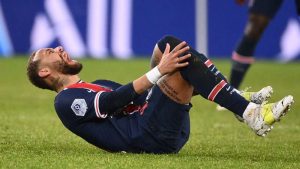 Paris Saint-Germain will be hoping that forward Neymar Junior recovers ahead of their Champions League group stage clash with Barcelona.

But the 28-year-old Brazil international, who suffered a hamstring injury in Sunday’s clash with PSG and Lyon, was sent off in the 1-0 defeat. , after a nasty clash with midfielder Thiago Mendes, is unlikely to feature.

A statement from PSG regarding Neymar’s injury said: “Further examinations will be carried out in 48 hours’ time.” and they hope he will recover in the near future. come back to continue playing.

The striker himself has said he hopes to recover in time to face his former club Barcelona, ​​who have not played much this season, especially in La Liga.

Neymar joined PSG for €222 million in 2017 as the most expensive player in the league, helping the club win the Ligue 1 title and last year’s Champions League final. in the hands of Bayern Munchen.