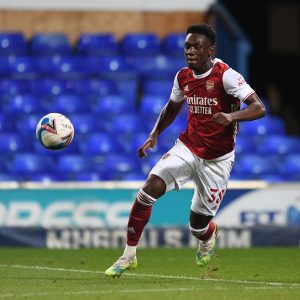 English FA Cup defending champions Arsenal are on the verge of signing Folarin Balogun to a new long-term contract.

Naija News reports that the signing of the new contract will bring an end to months of speculations about the striker’s future.

Gunners manager Mikel Arteta has usually expressed confidence that the Super Eagles eligible player would be tied down to the North Londoners.

“I think I am pretty positive about it and every time I spoke to him, he mentions the same thing, that he’s determined to stay here, that he wants to stay here,” Arteta had said in March.

“We have had some really positive conversations with his agent as well and Edu is in charge of that.

“He’s been spending a lot of time and energy to make that deal happen because it’s important for us to keep our talent in the house, and what we can guarantee is that we’re doing everything we can to keep him.”

Reports from Daily Mail claim that Mikel has succeeded in his efforts of convincing Balogun that his future lies in north London, with a new long-term deal ‘close’.

Balogun is on the verge of putting pen to paper, this will be seen as one of few positives amid months of toxicity and criticism, some of which stemmed from the situation surrounding the 19-year-old’s future.

4 days ago
Generated by Feedzy