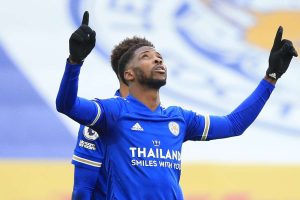 According to a Spanish publication, the 24-year-old is set to join Thomas Tuchel‘s side at the end of the summer.

Naija News understands that Iheanacho netted a goal for his club in their 3-0 victory against West Bromwich on Thursday night. Tuchel is said to be confident that the striker could do wonders at Stamford Bridge if signed and should the west London club miss out on signing Borussia Dortmund’s Erling Haaland this summer transfer window.

Iheanacho is no doubt one of the most in-form strikers in England currently and Tuchel has set his gaze on bringing the Nigerian to Chelsea to boost his squad.

The report added that Tuchel is not the biggest fan of Chelsea striker, Tammy Abraham, with the ex-PSG manager leaving the England international out of Chelsea’s starting XI a few times in recent weeks. Naija News understands that Iheanacho has so far netted 15 goals in 31 appearances for Leicester City this season.

Meanwhile, the proposed European Super League competition was dead on arrival as clubs backtracked and returned to the mother league.
Following the withdrawal of clubs from the proposed league, UEFA on Wednesday, April 21 released a statement that seeks to rebuild the unity that had been long enjoyed before the cessation.