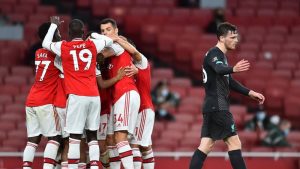 The line-up for North London side, Arsenal has been confirmed in their clash against Brighton on Tuesday night.

The club released the list of their starting eleven on it website, with the club captain, Pierre-Emerick Aubameyang starting after been away from their victory over Chelsea on boxing day.

The Mikel Arteta men will be matching into this match after defeating Frank Lampard’s team on Saturday.