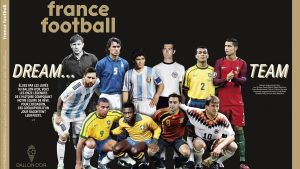 The French football magazine Ballon d’Or has named some of the best players in the world as the best team in the world.

In the midfield, the French sports magazine chose Dabi Hernandez of Spain, and Lothar Matthaus of Germany, while the attacking midfielders of the magazine chose Diego Maradona and Pele.

Lionel Messi, Cristiano Ronaldo and Brazil’s Ronaldo Nazario dominate the cast of the Ballon d’Or’s strongest team, according to the French sports magazine.

But the decision has already been criticized because some believe there are key players who are not included in the squad, such as Zinedine Zidane, Fabio Cannavaro and Ronaldinho.

Also on the shortlist is no former France international Michel Platini, no player from Africa or Asia nor any player selected from the United K.

Real Sociedad and Real Madrid face off at the top